The Mystery of Cambodian Music Videos

On a recent trip to Cambodia I spent a lot of time in buses, travelling from Siem Reap to Phnom Penh, and then from Phnom Penh to Kep and back. And these buses fed us with a constant stream of Cambodian (or Khmer) music videos. In many music videos, the theme was "cool guy has flashbacks of time spent on the farm with village girl, his one true love".

At one level, these videos didn't surprise me at all. In most private "travels" buses in Tamil Nadu, passengers are subjected to movies, and these also contain very similar music videos of lush, fertile fields and romances with village belles in traditional clothing. 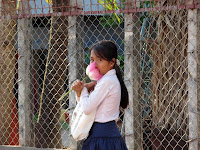 And, the Cambodian countryside is beautiful. Relieved to be off the bus, my husband and I rented a motorbike and went exploring down some village roads. Winding past hillocks and across verdant rice fields, we were joined by several other bikes taking guests to a local wedding, that was advertised for miles around by more of the same, blaring, Khmer pop. Looking for a little more peace and quiet, we came across a Buddhist temple. Made new in the traditional style, it stood stiffly at odds with its surroundings. This severity was, however, broken up by a group of schoolgirls who had gathered lotuses on their way home, and were shyly burying their faces in them. Soon after we met a bunch of much less shy, younger kids, playing in the water from a punctured pipe. One of them was too small to stand properly, and he fell in the sand, grubby and bawling, but adorable anyway. 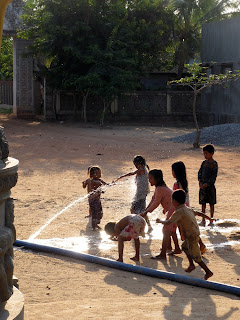 But at another level, the music videos took me completely by surprise, precisely because they were being made and played in Cambodia, not India. Modern research has estimated that approximately half of the people who died under the Khmer Rouge in Cambodia died from starvation and disease. This was as a result of the forced relocation of Phnom Penh residents into the countryside. They were expected to triple Cambodia's rice production, despite not having farmed before, and if they tried to feed themselves on wild berries, this was condemned as "private enterprise". The forced relocations began in 1975, a date that is still within living memory for many people, and even more recently thousands of mass graves have been found all over the countryside. Since the total death toll is most commonly pegged at between 1.4 and 2.2 million, this would mean that 0.7 to 1.1 million people died largely because of forced relocation to villages. Given this bloody history, how is it that Khmer music videos can still portray the village as the site of beauty, innocence and romance?

Perhaps the intended audience for these music videos are those who were already living in villages when the Khmer Rouge came to power (and were treated comparatively better), and who continue to live in villages today. Or perhaps the rural does have a pull on our imaginations, that defies even the harshest realities. But I didn't spend enough time in Cambodia and don't know enough (well, any) Khmer to be able to say this with any certainty. However, in the context of Tamil Nadu I've given this more thought.

Anyone who has compared Hindi and Tamil music videos will notice a marked urban-rural difference between the two. In Hindi music videos, everyone is rich, lives either in Bombay, the U.S. or Europe, and spends all their time in clubs either wearing, or looking at, short skirts. If there's a village scene, it's when the hero returns home for a holiday, and meets the simple village girl of his dreams.

In comparison, there seem to be many more Tamil films where most of the story takes place in the village, where you have both villains as well as romantic heros and heroines. My guess is that this is because Tamil movies still cater largely to the domestic Indian market, whereas Hindi movies have their eye on the diasporic market, which although smaller than the Indian one in terms of numbers, brings in the money.

Why is all this important? Because movies are key to shaping our aspirations, for all of us - but particularly in villages where fewer sources of information are available. I'm not against urbanization or migration per se, but it is worrying that Hindi movies present the West as a place where everyone gets rich immediately, a situation that is not likely to come true for many first-generation migrants. While Tamil films are completely unrealistic in terms of their fight scenes, song-and-dance sequences, and perhaps plot lines, the fact that they neither idolize nor completely ignore rural places could bring us gently down to earth.
Posted by Devyani at 9:50 AM